Cerativity- Beyond the bars and barriers.

I requested Ms. Sarita Chauhan and Sri Subodh Poddar. Sarita is a Delhi based artist, now settled in Mumbai. She is  a self taught artist. Having several group and solo shows of her paintings at Delhi and in Mumbai, she has crossed all the barriers and established herself with knowledge and grace. Subodh is an Ad Guru and highly creative. he had invented "Dance Scape" with the jugalbandi of art and dance. In his Dance Scape, dancers dance and he sketches with minimal lines. All renowned Indian Classical dancers had participated in his such innovative concept. Recently, he had worked with the dancer of Mohanjodado and exhibited his sculpture in Mumbai. Both of them accepted my request with life and support.

All paintings were there. I did not tell anything about them. Let them see, let them decide. It was an examination for me too, whether a small child's painting and a vetran's painting will stand before each other? Whether this jail inmate's art of work will attract these judges?

After so many rounds, they finally selected some paintings. I got aghashed. Painting, which was selected for FIRST prize was of a 4 year girl's painting. And the judges special prize was bagged by inmate's art of work. I simply cried. They became nervous- "What happened? Did we do something wrong? Tell us. We may change our decisions too. Its just selection round. We can rethink on our results."

"Nothing to be done. Unknowingly you both had stamped on my faith that creativity are beyond the bar of age, atmosphere, class, creed, richness and poverty. The 4 year old girl, who won the FIRST Prize was a slum girl and judge's Special Prize was won by a jail inmte.

Result were declared. Winners were informed. Date for prize distribution was decided. It was 15th May- World Family Day. AVITOKO was established on May 1st- on International Labour Day. And celebration of our faith will be on World Family Day.

This was not a big issue. The main thing was that how the inmate will get awarded?
Posted by Vibha Rani at 4:10 AM 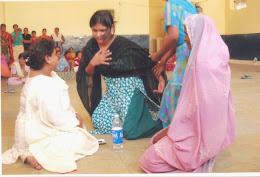